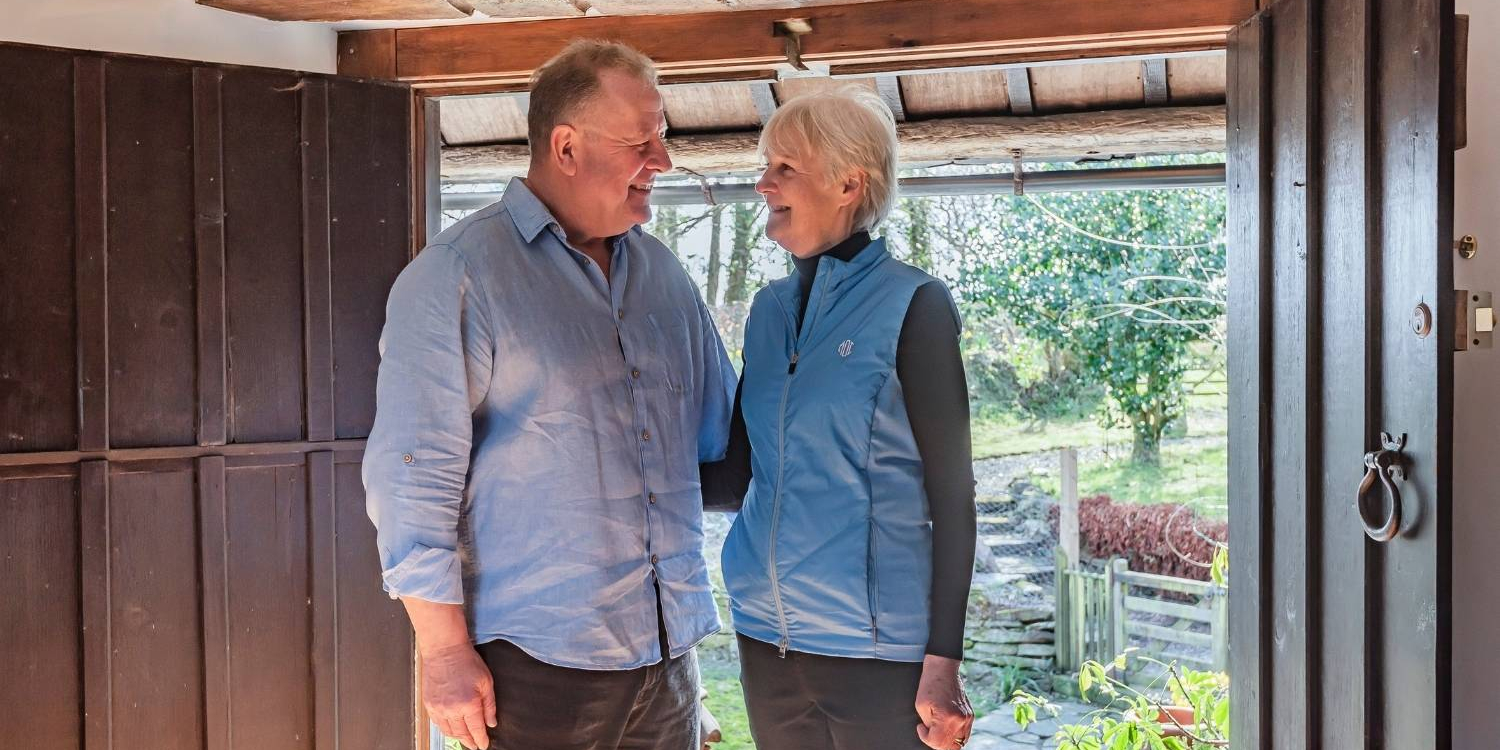 How can you effortlessly sell your home and achieve the best price?

Moving home is monumental — a thrilling adventure and an intimidating challenge. It can be an emotional roller coaster whether you’re moving around the corner or to the next county. Moving can be stressful on so many levels, but beyond the stress of logistics, starting something new brings conflicting feelings of eagerness and anxiety.

Deciding to downsize is life-changing. We first met Wendy and Lindon in late 2020 when their original attempt at selling their beloved family home wasn’t quite working out the way they’d hoped.

“Like most people of our age group, sticking with a conventional and known estate agent that offered a high-street presence initially appeared to provide comfort. They were solid and knew what they were doing, or so we thought!” comments Wendy.

Finally, with the sale, search and purchase finally over, we’re able to sit down with Wendy and Lindon (oh and Leo, resident good boy!). They are now comfortably cocooned in their beautiful Cornish home and ready to talk about the trials and tribulations of the selling process. 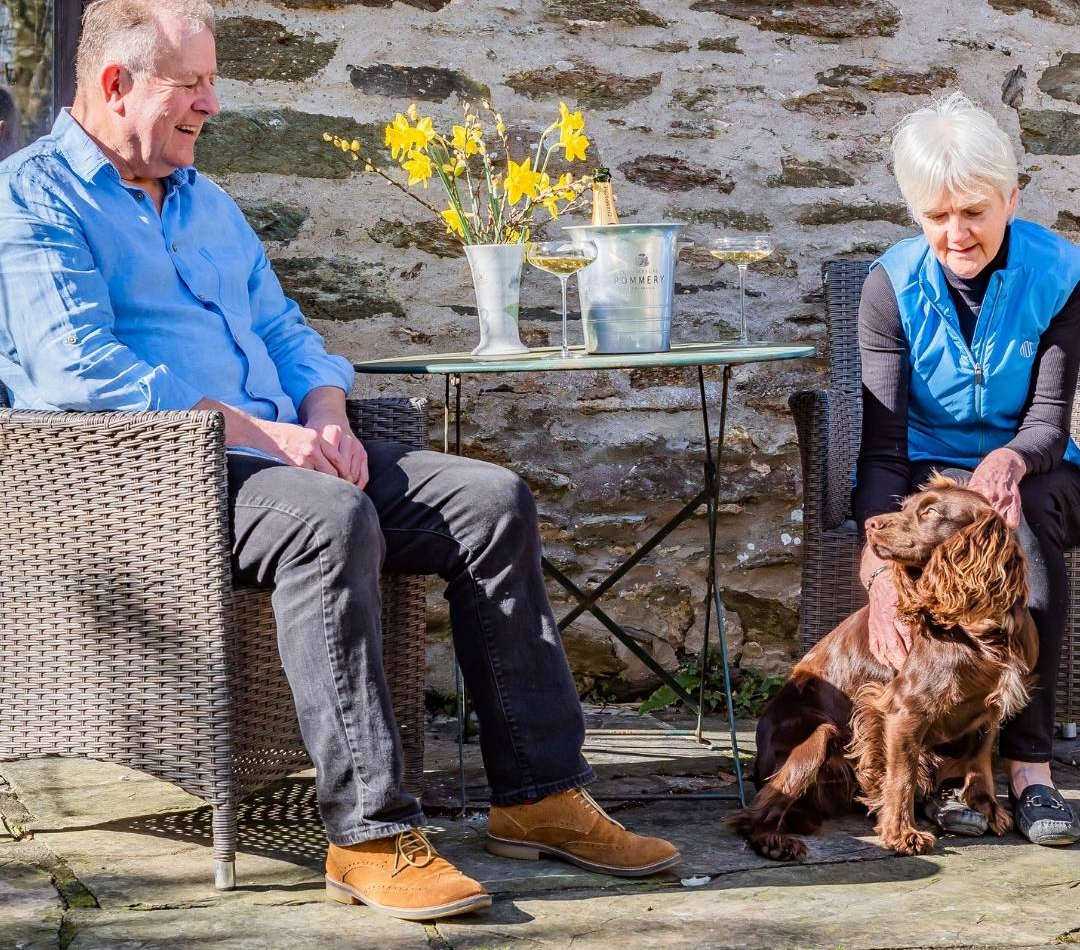 Wendy and Lindon had called ‘Orchard Cottage’ their home since 1982. So they instinctively knew the time was right to make a big move as retirement arrived. “Life was now ours for living with no work pressures holding us back,” says Lindon.

And so, they embarked on the mission to move. Beyond their professional lives, it was now time to move nearer to family, so a new county was on the cards. A new home to make memories in, new routines to fall into, new restaurants to become their favourites, and new corners of Cornwall to fall in love with. Newness is exciting, and despite the tinge of sadness in saying goodbye to their long-loved home, they couldn’t wait to turn the page and start their next chapter.

And so, of course, finding a new family to pass the baton to so that they may begin a chapter at ‘Orchard Cottage’ was top of the priority list. Wendy notes, “We initially chose a High Street agent well known to the area who appeared to enjoy large exposure due to their length of trading.”

Naturally, if you were in Wendy and Lindon’s shoes, you may believe the conventional high street agent would be the right choice. After all, you would assume that history and a local shop presence would be beneficial to selling your home.

Nobody puts their property on the market and considers it won’t sell. But what happens when things don’t go as planned? Disheartening and almost unfathomable to think that nobody can see what you see in your home. For the home you have enjoyed as a family for over thirty years to be unsaleable. Yet, that is the situation Wendy and Lindon found themselves in after one year on the market.

Picture this, their pride and joy, a striking 120-year-old building constructed in traditional Sussex stone with tiled elevations. Originally a two-bedroom property, sensitively modernized over the years to provide for the demands of family living. The outcome being four bedrooms, three bathrooms, several recreational rooms with an inglenook fireplace and stone features, all the mod cons a family needs wrapped in characterful finishings. All set in a beautiful herbaceous garden with areas for alfresco dining, all sensitively illuminated with crafted lighting and bountiful country vistas.

So, the perfect house, perfect location. Quirky, no doubt, but also seriously charming with just about everything a new family could need and then some. So, how could a property like this be sat on the market for a year with only two viewings?

Lindon remembers the initial contact with the conventional high street agent, one of the firm’s Senior Directors. “He was gushing with confidence; he valued the property above what we thought was appropriate! But hey ho, he was convinced the property would sell very quickly.” The estate agent was so confident that when questioned around professional marketing, photography, videography and such like, We don’t need to do that,” was the retort!

And so, why argue with the professionals, right?!

“However”, Lindon continues, “What actually followed was a litany of failings, disappointments, failed communications etc., exposing the limitations and flaws when using an agency with a rigid command structure.”

Your journey from For Sale to Sold is personal and important.

In a recent study by Stipendium, the total time it takes to buy a home in the UK ranked as the second most stressful aspect of moving home.

What exacerbates that stress? Being left in the dark by the industry professionals, as did being unable to contact them to get an update.

Regrettably, most estate agents do not have the time or resources to dedicate the required efforts to you and your move personally. Therefore, despite even the best of efforts, conventional estate agencies are often not built to produce the best result on an individual basis.

Wendy continues, “TAUK manifested itself into our consciousness in the guise of Jonathan Crawford Jones. Jonathan initially hand-delivered a well presented bespoke marketing magazine with a personal profile unlike any previous material seen, which ordinarily went into the rubbish bin.”

Wendy goes on to say, “From our first introduction with our TAUK agent Jonathan Crawford Jones, TAUK were refreshingly different, personal and valued us as a client. There was no inflated sales pitch to guarantee an instruction. Instead, TAUK provided honest assessments regarding the local market and in particular how a property fitted into that marketplace.”

Lindon adds, “From the moment we met Jonathan, we knew we had found the person who would sell our property. It was a given as far as we were concerned.”

A ringing endorsement as that may be, yet we wondered and so had to ask if Wendy and Lindon had any concern about TAUK not yet being a household name?

“No,” says Lindon “, the fact TAUK was relatively new was not a barrier as it became obvious TAUK was refreshing different in its approach. Plus, the TAUK group and Jonathan had extensive experience within the industry.”

An almost imperceptible nod passes between Wendy and Lindon as he continues, “Plus, the honesty to say the conventional approach did not work, and the effort and benefits not geared to the seller. Jonathan explained that he and his business partners at TAUK had developed a concept of selling properties that put the customer first. Volume customers were not their agenda believing less was more with quality customer service high on their priority list.”

Now, we all love a story with a happy ending. However, as we sit with Wendy and Lindon, we get the feeling they’re as excited to tell us what happened next as we are to hear it.

So we ask the inevitable ‘what happened next’ along with an ‘and how did that compare to what had gone before?’.

Wendy recounts, “Jonathan was as good as his word. We had personal contact throughout. Hours of quality personal time with us allowed Jonathan to understand the house, garden, neighbours, community to identify the positives. He shared his thoughts on where improvements could be made, which, when acted on, became an enhancement. Every phone call, text and email were answered and acted on.”

Lindon adds, “Jonathan had enormous energy and zeal for the task ahead. Selling a house is a stressful exercise, but with Jonathan as our guide, he somehow managed to relieve us of this burden. Whilst we had fourteen fully engaging viewings, we were conscious Jonathan had behind the scenes screened out those, where the property would not have met purchaser’s objectives or simple time wasters.”

And all this after a whole year on the market with no luck?! (Sorry, was that catty?)

Lindon laughs, “Within the first four days, Jonathan had attracted a large pool of interest which saw five positive viewings. He undertook each and every subsequent viewing regardless of the day or time, ensuring it was convenient for all parties without favour to himself. A total of fourteen first-class viewings we had our offer.”

And to clinch the deal?

“The house was sold in 32 days. To top it all, TAUK achieved a selling price beyond our expectations.” The smiles say it all.

Wendy finishes, “Jonathan certainly put the hours in to sell our property. He was always there for each interested party being highly professional and diplomatic. He deserves his fee with no resentment on our part concerning this matter. He worked hard for every penny.”

Our unwavering belief, based on helping tens of thousands of people move home across the UK, tells us that each home move needs a strategy. First, every homeowner needs an advocate in their agent. Only then can they rest easy after they move, knowing that they achieved the very best outcome.

But let’s hear from Wendy and Lindon; how would they summarise their experience?

With a wry smile, Lindon says, “Seriously, consider your requirements as a property seller. Do you wish to be treated as a valued individual or happy to be part of a volume-selling agent with a High Street presence employing multiple staff? A large High Street profile with volume properties is no guarantee of a sale!” a shake of both their heads punctuating the point. “On since researching other High Street agents, it would appear they were all following a similar model insomuch as no one person took responsibility for an individual client. Whilst operating as a collective, each held a small part of the process, thereby, in my opinion, fragmenting a knowledge base.”

This is ‘Property Sold Properly’.

This is the time saving, customer-focused solution to selling and helping you find your new home.

We could end this interview with poetic prose about home moving in a rather Kevin McCloud-Esque dramatic fashion. However, sometimes the best points are made simply. So, turning back to Wendy and Lindon, we ask, “Would you recommend TAUK?”

The answer from both? A resounding “Yes, without question.”

We even think Leo approves.

Read why you should choose The Agency UK to sell your property.

Keep up to date with all our latest news and properties

Keep up to date with all our latest news and properties

Please enter your username or email address. You will receive a link to create a new password via email.

Your email address will not be published. Required fields marked *